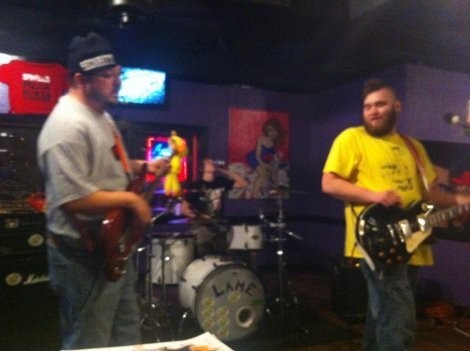 LAME developed over a period of months in late 2012 after a series of jam sessions, one-off gigs and a lot of screwing around, out of the ashes of two previous bands - Granny Syphilis and Buttknuckle Suplex. Audiences didn't like the previous names, repeatedly saying "You guys are LAME!" So the band decided to change its name to LAME, strictly to be able to say "Yes. We. Are."

We are made up of That Dude Alex on guitars, vocals and assorted street drugs; Kung Fu Weasley on drums, percussion, and xBox 360; and The Mayor on bass and a serious spending binge. They can usually be found in the Weasley basement preparing for the zombie apocalypse.

We have been playing live in the Louisville, KY area since December 2012, and is currently seeking gigs in the genre That Dude refers to as 'butt rock.' We promise to be the loudest band you've ever heard.